..and the live show is still our choice~ a. garcia

...and one of my favorite challenges is to capture one "focused" picture of any bird that finds its food by foraging!! They jump , they dive, they scratch... little butts tilted up...little heads pointed down...digging ..scratching...hunting...eating..moooving.. 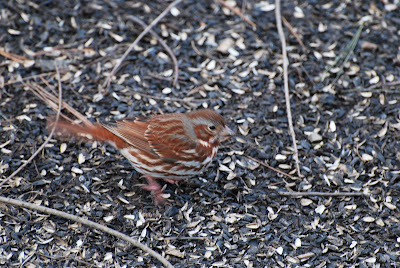 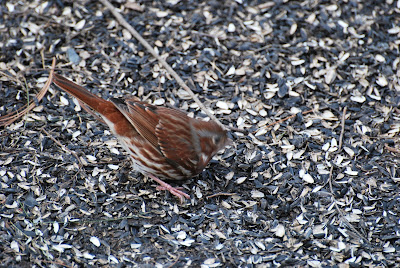 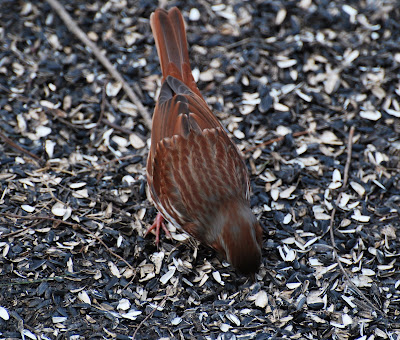 Finally, this little fox sparrow takes a break..only to quickly fly away.. 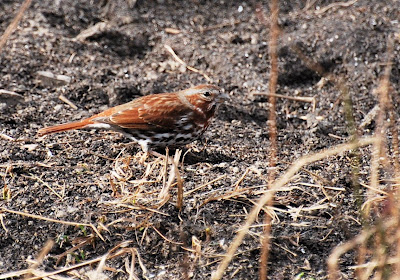 ..getting a better perspective, maybe, on where NEXT to forage for food!
Such pretty little birds..but oh.. so energetic, they make me want to take a nap! 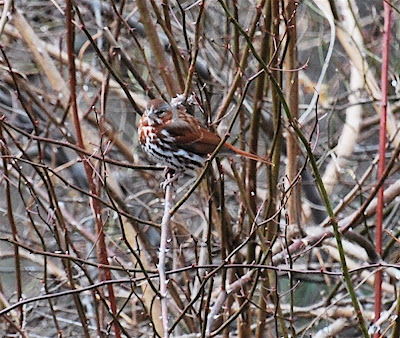 Saturday afternoon, my husband and I went on an "owl prowl" that was being held at one of the local nature centers. We took only binoculars, knowing that weekend walks usually bring out the crowds and I felt the guide would probably appreciate it if some people showed up with only binoculars and their curiosity. I had also read that owls have been known to have a heart attack from the stress they get when people try to get too close or bother them, so, I felt, the less cameras the better....
I knew we would be visiting a park, that is close to where I live, where a great-horned owl is known to be nesting. Using spotting scopes, we were able to not only see her but also her mate!! Such amazing colors!! Absolutely stunning to see and such huge eyes..Grandma!!
I went back yesterday and from about a 1/4 of a mile away, and my 300mm lens, I was able to get these shots of her. 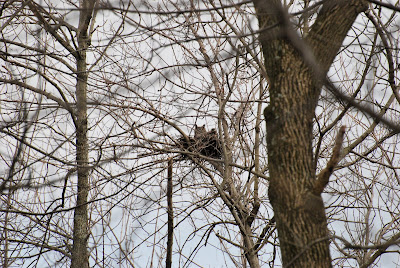 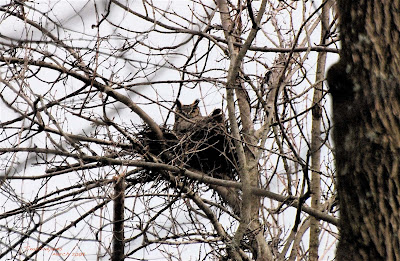 I then drove to a field filled with pine trees that was several miles away. One of the people I met on the walk shared that long-eared owls had been seen in this field. I quietly walked around for about an hour and luck was with me, thank goodness, as I spotted this owl sitting high in the tree. I couldn't believe how nervous I was..had I really spotted a long-eared owl?? It was way up there and partially hidden by many branches. I realized I was shaking when I took these pictures.. as its tail feathers are kinda blurry!! The patterns and colors of this creature were absolutely gorgeous. I had turned off the flash and knew my camera was only making small clicking noises when I took a picture, but, you know, neither of the three owls, I caught in my photos, gave me any indication (such as moving or stretching) that I was bothering them...even though I knew..for sure.. THEY KNEW I was there!! 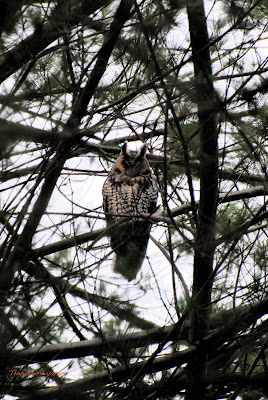 there are two owls in this picture...do you see the back of the one sitting in the upper left corner..all in all there were five owls in this tree..but I didn't want to overstay my welcome and felt they had been such good sports to let me take their pictures..so I quickly got out.. 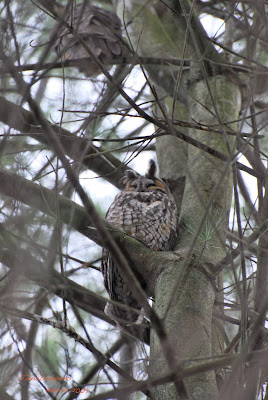 I ended up at the park I usually visit, where I had seen the screech owl last week....
This wood duck house is where we saw two screech owls during our "owl prowl" Jeeze, I have checked this house many times but never saw anything!! Go figure!! We sat behind this blind watching a grey-phase screech owl who had its head sticking out of the house opening..he was just adorable with his scrunched up face... when all of a sudden a red-phase screech owl poked its head out the same hole! YIKES!!.. that was the owl I had seen in the pine tree.. only the day before... how I WISH I had a camera at that moment!! So... yesterday I went back and sat in the blind and watched for a while but no occupants peeked out.. :( 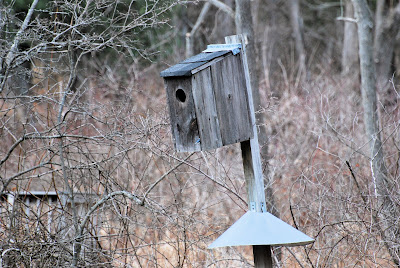 ...interestingly, though, if you click on this picture you will see a feather of a blue jay sticking out the lower right front of the box...an indication someone or both enjoyed an early morning snack? 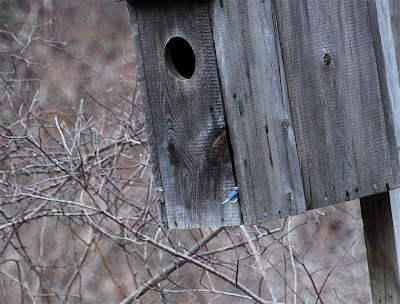 This is NOT one of my pictures..( I borrowed it from a book) but it is a picture of a red phase screech owl..and looks just like the one I saw in the tree with the cardinal feathers...
I probably will be watching this wood duck house a lot in the future..as it looks like these two just might be nesting there..yipee!! 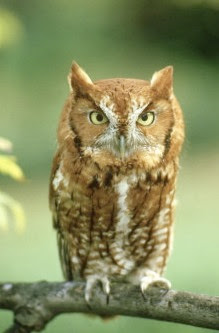