Why is it I plan such lengthy trips to far away places to try and see new things when I haven't visited many of the attractions that are so near to me? I have lived in Pennsylvania all my life,
30+ of those years in southeastern Pa. and yet I have never taken the time to visit Cape May, New Jersey!! ...not until this past weekend! In a little over two hours we were pulling into the parking lot to join a bird walk.
Our bird walk was meeting at the Migratory Bird Refuge, which is near Cape May Point State Park, at 7:30 am. We arrived a little early and met some of the other birders including our bird walk leader Pete Dunne, a well-known author and expert on birds and birding. 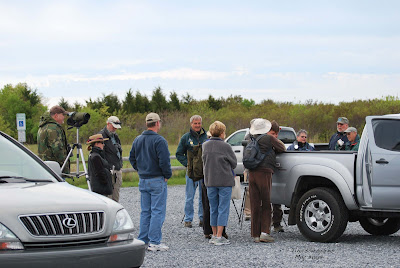 We were heading out to the beach to visit some nesting Piping Plovers and American Oystercatchers. The weather was over cast and a little rainy but comfortable. We were visited by a few Meadowlarks and several terns as we walked toward the beach. 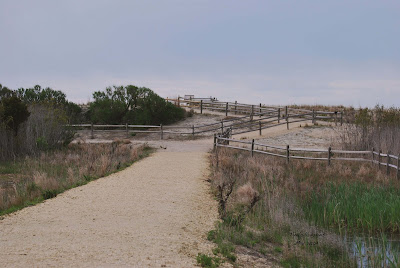 A beautiful Great White Egret met us as we approached the top of the dunes. 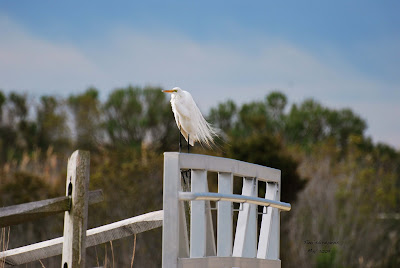 We were lucky to see many different shore birds, along with those that were nesting...but the bird that created all the high fives and ya-hooing by our group was the Swallow-tail Kite. Three of them gracefully soared over our heads as we stood and watched in awe. They are small hawks, black and white with blue-black under parts. A very striking bird and apparently one that is not seen too often in Cape May.
Upon spotting them one of our bird leaders was instantly 'twittering' the info ..telling ALL that not ONE but THREE Swallow-tails had been spotted!! A record for Cape May birders!! 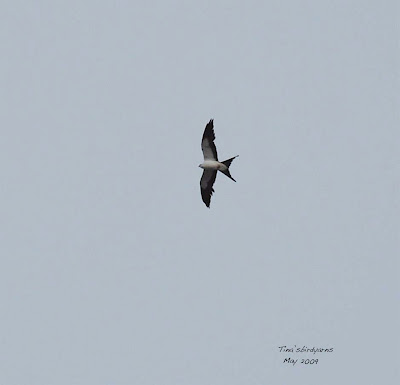 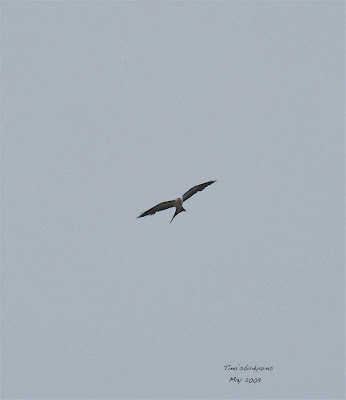 After the excitement of the Swallow-tails we were graced by the appearance of this Little Blue Heron. An immature in transition, but oh, what beautiful blue-blacks and gray hues against those heron whites! He was with two other Little Blues but he was definitely the most attractive one! 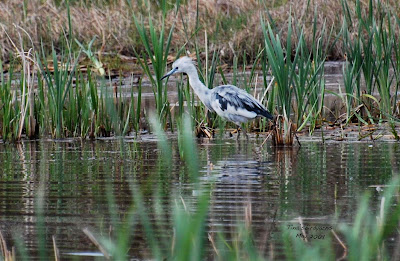 and when I looked down into the water near the board walk, I spotted this Least Sandpiper quietly getting its breakfast..what a name, I wouldn't want to be called least.. 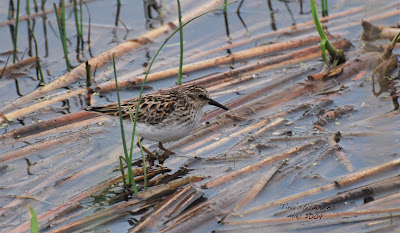 As we were ending our bird walk we came across a lake filled with Mute swans! Several families were paddling around together... 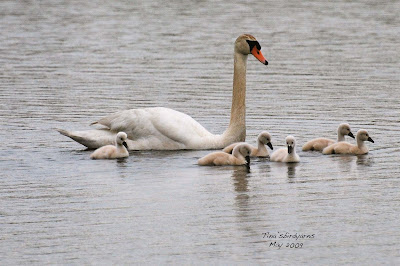 Mom was demonstrating how to forage the lake's bottom for food but several of the little ones still seemed a little puzzled about the whole process. 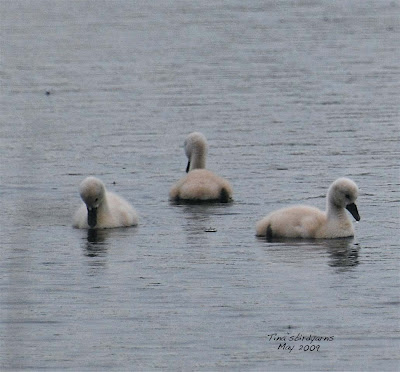 Little did I know when I packed my peanut butter and jelly sandwich early Saturday morning that I would be walking the local nature center for almost 7 hours!! I arrived for the weekly 7am bird walk about 6:30 am (I like to get there early and check the blind for the screech owls)..when I noticed several bird-walk leaders arriving, as well as some of our more well known experts ( one lady who co-wrote "The Plants of Pennsylvania" and still teaches botany at The University of Penn) I found myself becoming more than just a little curious..Huh? Everyone seemed to be preparing to join the morning walk..dragging the socks up over the cuffs of their pants to keep out ticks... spraying Off on caps and sleeves...WOW! how nice to have all these people along to share that birding enthusiasm.. but what was up??? ...and then I am told this was a PAMC count/walk. A hike would have been a better word. Our purpose was to count every bird we might see... through mud and swampy areas. Places I have never visited before.. ( all voluntary of course) but in the end I lasted the whole day and was one very happy birder, having seen many new species of birds, reptiles and plants. I survived 7 hours of walking and birding!! Exhausting but fun!!
Our first sight of the morning was a real eye opener for me..the Scarlet Tanager..OMGosh..what a sight for my eyes!! He was almost at eye level and was too involved in his "aria" to bother with "we" who stood staring in awe!! 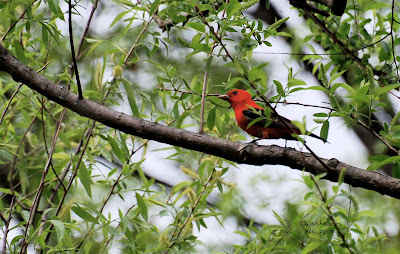 Not far from where we spotted the Tanager, we came across a flock of Cedar Wax Wings..gorgeous of course...so many colors on one bird...awe..they just made my morning!! 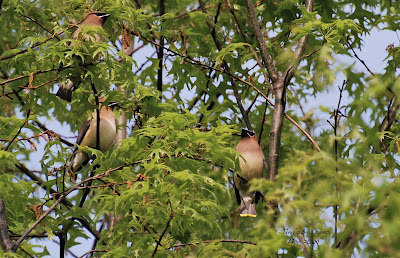 ...this little Rose-breasted Grosbeak was playing hide and seek and just wouldn't allow me that one good shot! He was quite actively hopping around the tree.. but what a delight to see this guy!! 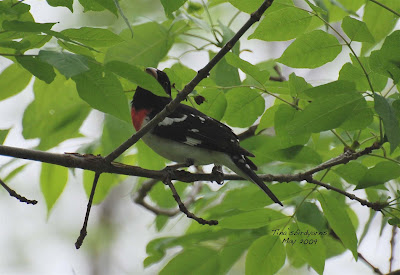 Mr Thrush was just the opposite..he was quite content to just sit. ..slightly turning his head to say , "Oh hi, just passing through?" 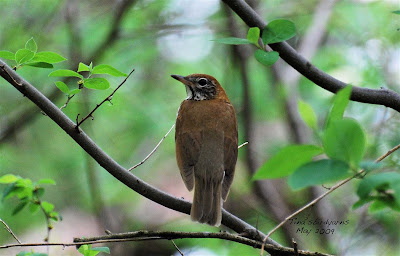 This little Eastern Towhee, on the other hand, was not the least bit quiet...a bit ruffled in his appearance and very serious and intent about singing what he needed to sing!! Such a look!! 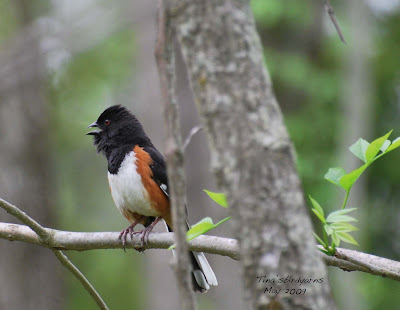 and then there are the cute little silent types ...who just sit quietly hidden in among the leaves...just letting the morning glide by..not a care in the world. Such sweet eyes on this little warbler...pine warbler, I think. 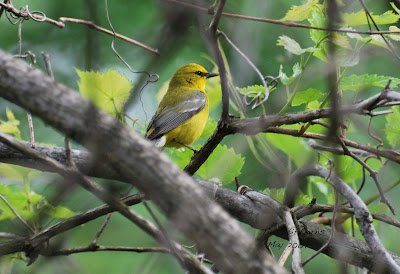 We had stopped to take a break when this beautiful Spice-bush Swallowtail butterfly landed near me..stunning me with colors that just sing so well together .. how wonderful! 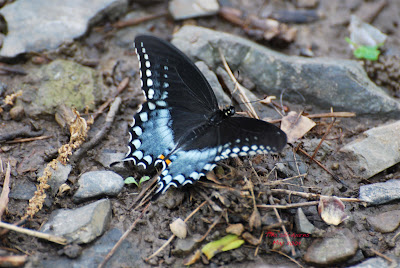 This was puzzling at first...but then I realized it was a turtle...a box turtle that was hiding under water near this log...did you know box turtles can completely close the space between their shells for protection? ...I didn't, but found that pretty interesting. 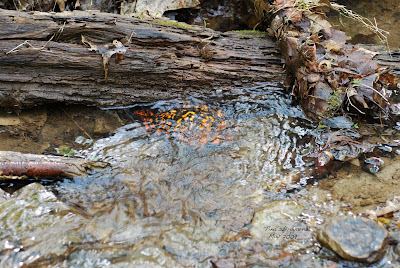 and yes I know this was a bird count day but who wouldn't stop to look at this guy...a red-eared slider...not a native species to Pennsylvania. Apparently someone had them as pets and let them go in this park and they seem to be doing fine. One last cool fact, tho, they live to be 50 to 70 years old and check out those toe nails!!! Bet he didn't walk 7 hours... ouch! 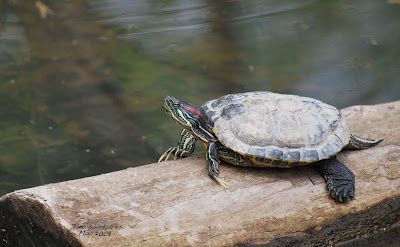 Hannibal, of hannibals animals, has asked us to try and choose a picture that would represent our personal best. My birding library continues to grow but I have a looong way to go to try and emulate photos taken by many of my bird-blogger friends. I am always so amazed at what unbelievable subject matter, quality, detail and color my blogger friends acquire in their photos and I hope that some day I , too, will reach such a level of craftsmanship with my photos.....
...so here goes, I took this picture on December 18, 2008 from inside my office window. It is a Nashville Warbler who must have strayed from its flight path trying to get to its winter destination and some how landed in my backyard. It was eating larvae from my Azalea bushes. Such a wonderful surprise for me and according to the many bird experts who saw my picture, a very rare find in December. This is the original photo... 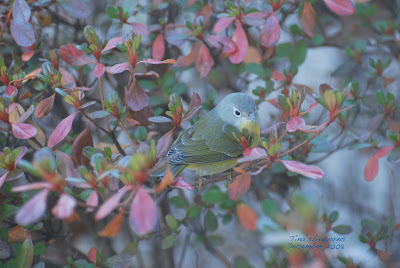 ...and this is the cropped version I posted back in December. I was thrilled to have had the opportunity to photograph this bird and only hope it survived our winter weather. :(
Thanks Hannibal for creating this meme and if you want to see more "personal best" please visit Hannibal's blog at... http://hannibalsanimals.blogspotcom 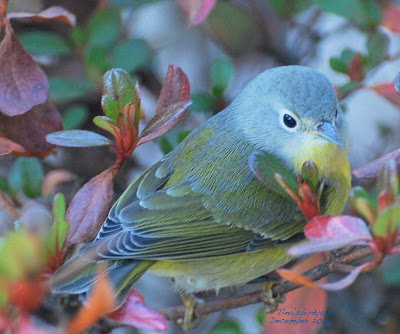 Nobody knows the work it makes
to keep the home together.
Nobody know the steps it takes,
Nobody knows-but Mother.

Are you talking about me, said the little Warbling Vireo??
I caught this shot yesterday not far from the parking lot overlooking the lake!! Such a sweet bird and so determined...and as we all know.. the toughest job in the world is waiting....
you might have to click on this pic...as I didn't want to get too close... 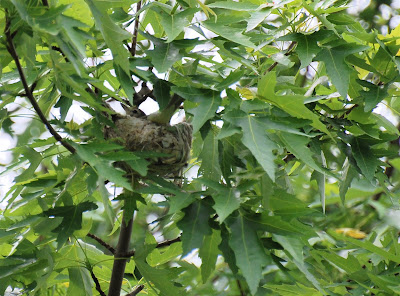