Look what I found a few days ago!! A Magnolia Warbler. My first! Yea!!
It's always amazing to me to see how Mother Nature helps it creatures blend with the colors of the fall season. After having heard from many experienced birders about all the markings one has to be aware of to identify fall warblers..and there are so many variations..whew!! It's my opinion that this little warbler should get top billing for "having the most"! A nice, bright eye ring, striking wing bars, some streaking on it's yellow underparts...and a tail that shows a large white patch in front of that black tip! Lucky for me that I got a photo of it to study...as I probably wouldn't have remembered any of those field markings two seconds after it flew away! ;0 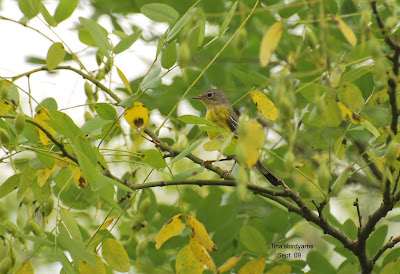 This little Philadelphia Vireo almost slipped past me as I walked along the trails at a local park. It's that quick little movement you see out of the corner of your eye...and then you stop and stare and stare..knowing you saw something move in that tree..it's the thrill of the hunt that keeps me coming back! 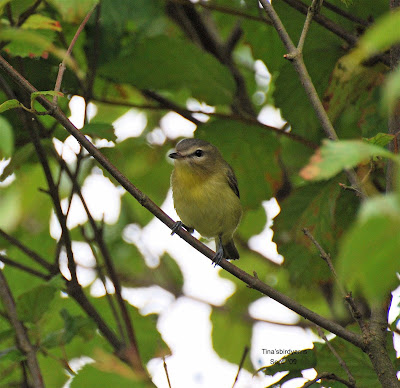 This little bird is a welcomed, but rare, visitor in our area. He certainly is a sweet looking bird. The first Philadelphia Vireo was discovered near Philadelphia in 1842. Finding this little guy was definitely a WOW discovery for me..a lifer I suppose. At first glance he was hidden by all the leaves and I believed he was a warbler but when I, finally, saw the white-bordered black eye-line.. I thought different!! 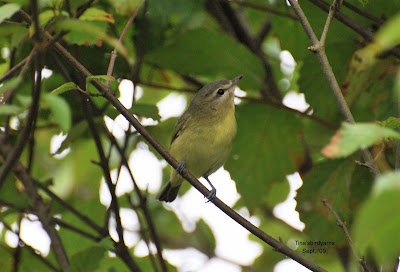 He certainly was patient with me...as he sat for several seconds which allowed me to capture some better views of those eye markings, plus I was able to get several shots of those olive green to yellow underparts. I have since read that he is probably a fall juvenile due to his yellow belly color being rather bright. Apparently older Phil. Vireos are much duller at this time of the year, which is pretty much the opposite of what I would have expected! 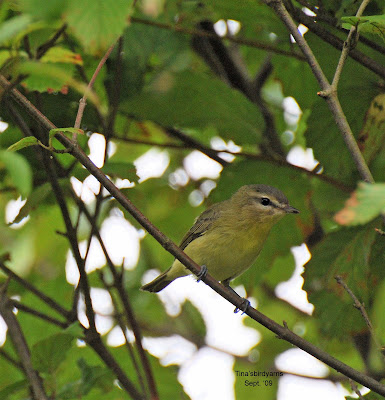 His little gray cap kind of sealed the deal... Yep, I had found a nice hidden treasure on a beautiful fall day among all those ever-changing leaves. The hunt, the find..life is good! ;-0 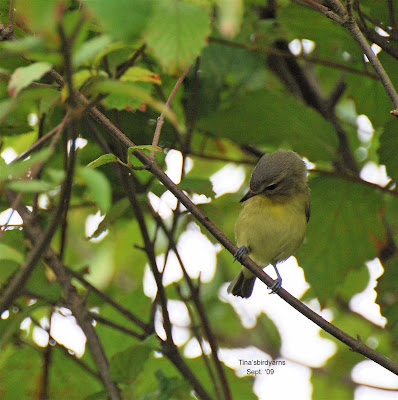