Four is always better than one...

I really need to apologize to everyone for being such a behind on visiting every one's blog. The weather has certainly played a huge part in my being indoors or out. I thought I had the perfect plan when I penciled in events for my June calendar. A few days busy and a few days not.. and then the rains came and poured and showered and poured and hailed... and things got canceled and then rescheduled... so now my once neatly scheduled calendar is one big cross out and re-penciled page of days filled with too many gotta dos!! I have had these pictures ready to post for about a week now and I am just now getting around to it!! I miss reading every one's posts and after this weekend I will have more time to catch up!! Sorry.
In April I was shown where a male Pileated Woodpecker was working on a nest. It was shared with me, that he has been a resident of this acreage for several years but had never been seen with a mate. I visited his nest every time I came to this particular area and would watch him work and work to create his digs in this sycamore tree. He literally spent days cleaning out the cavity and enlarging the knot hole and making another hole above the knot hole. Click to enlarge! 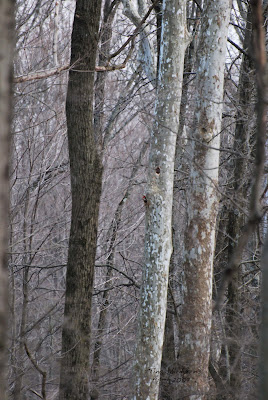 Several times that I visited, I would hear him before I actually got to his nest sight...calling and calling..a very terradactyl-like sound. Several other birders had told me he has created a nest before but with no success in attracting a mate. 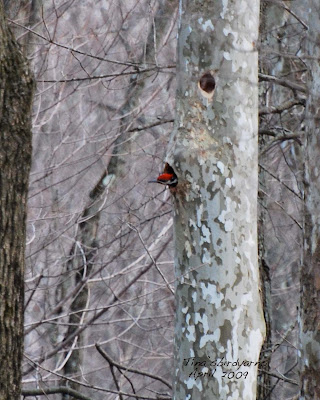 ...but early in May, a very pretty little female Pileated WP arrived and must have been very impressed with all his hard work, because she decided to stay!! It took several visits before I actually saw her and getting both Pileateds in a photo was not to be ... prior to her nesting! They were both extremely skittish and would scream off into the forest at the slightest noise of anyone passing near by.
It wasn't until the young were born and started popping their little heads out of the nest holes that I even tried to capture a shot...and even then my attempts did not turn out very good! 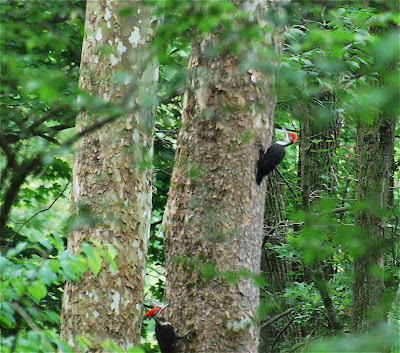 I was able to crop one photo enough to get a better look at Dad... 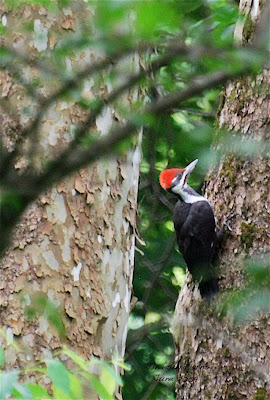 but it was the little ones who captured my heart when I saw them for the first time!!
Each had taken one of the nest holes as their little port holes to the world and began exploring what was going on outside that sycamore!! 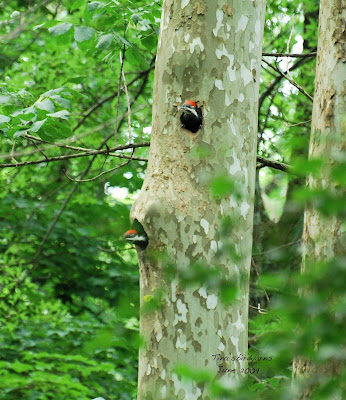 I never attempted to get close to their nest..and most of my observations were made with binoculars..and my 300 mm lens just wasn't powerful enough to get a good sharp image..but I felt thrilled that I was even able to witness all four birds during the same visit!! The babies did fledged last week. I haven't been back to see if they are still around but I'm crossing my fingers that they are and that they continue to call this acreage home, because as all birders know when it comes to those hard to find birds, four is always better than one. 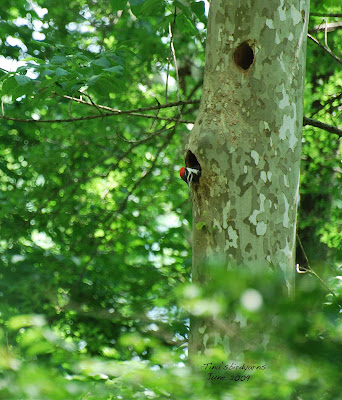 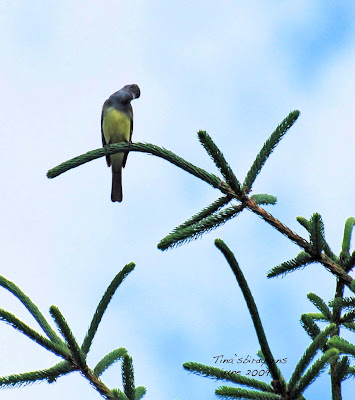 I definitely interrupted his song and caught his attention with the clicking of my camera...but only for a moment then he was back to singing and enjoying the view. 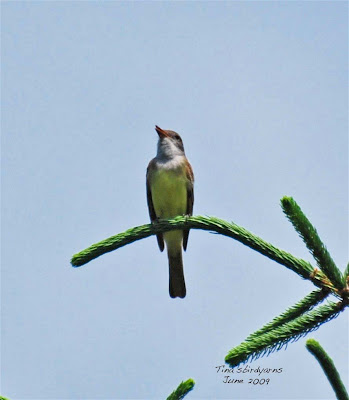 The Great Crested Flycatcher, with his signature cinnamon wings and tail and that bright yellow belly...enjoying the afternoon sun. 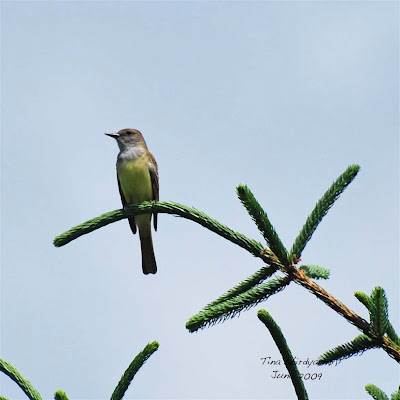