In my neck of the woods!

Recently when looking through my photo library..I noticed that many of the pictures I have taken in the last few weeks.. kind of have a theme...a weird neck theme! Uck!! Was I subconsciously thinking 'neck' because I've had a pain in mine due to trying to catch a glimpse of those tree-top warblers? I'm not sure, but tom the turkey was the first "neck pix"... That little pony tail hanging from the bottom of his neck is his beard!! What a crazy place for a beard!! 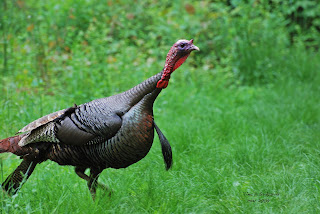 ...and then there was this little deer who was carrying a radio-collar around its neck.. she was successfully ignoring me as I was peeking at her.... ah ..neck!! 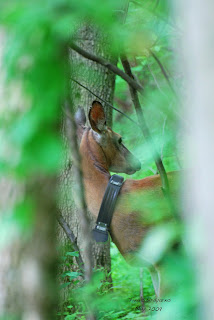 And what about these Cormorants? They seem to twist, bend and contort their long necks in their quest to preen and or maybe show their respect to the perched bird on the left?? I thought the one in the middle was going to fall off the log as he twisted and turned his neck.. 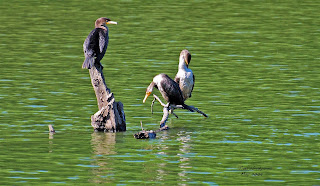 ...and then there are those wonderful Red-eyed Vireos who bend their little necks and belt out those crystal-clear sharp notes... which seem to hang in the air forever.. 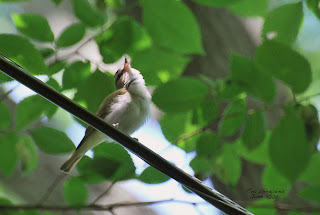 ...and why is Mr Oriole tilting his head and looking at me with that puzzled look?? ah..maybe because I am trying to imitate part of his song and he JUST can't believe that anyone could make such horrible sounds?? I've, now, become the pain in the neck!! 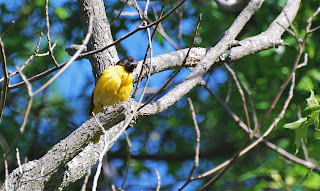 Some birds, like the Green Heron, only share that they have those long colorful necks when they want to look down into the water for lunch!! 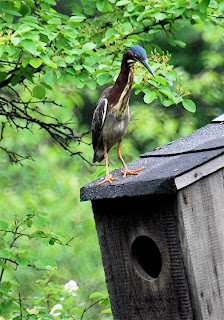 and speaking of stick out their neck...here is one of our little Black-capped Chickadees getting ready to fly the coop!! He sat there teetering for about 20 minutes before Mom and Dad coaxed him out for his first flight. Isn't he just adorable..with his messed up hair do and that open mouth look on his face? He flew into the nearest tree, to be with Mom, Dad and Bro and I'm just hoping that the family does well and...dare I say, stays in my neck of the woods! 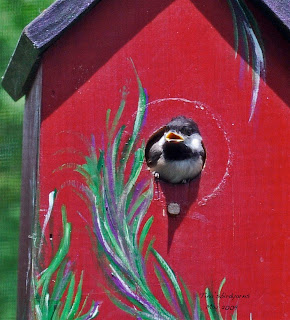 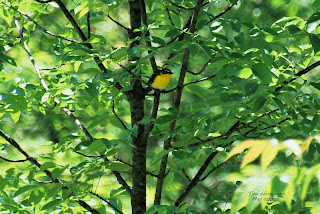 What a delight to finally see this Yellow-Breasted Chat! They say he is the largest warbler with quite a big bill and a long tail!! His call is quite amusing..he makes several different sounds, similar to a mocking bird or a thrasher. I heard him in the brushy tangles...and it was several minutes before he decided to make his appearance. I had seen pictures of him in my bird guides but I don't think I was ready for how big he was compared to all the other tiny warblers I had seen this Spring!
Quite a handsome fellow with that bright lemony upper belly and throat! 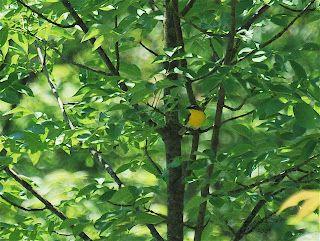 On the way home I was happy to see the Gnatcatcher carrying a worm to the nest. I believe it is Mr G ...but I wasn't able to see any little tiny mouths stretching to get that worm..so maybe it was for the Mrs... I stared and stared trying to see... 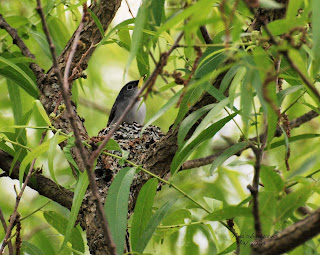 but when I saw the look I was getting...I decided it was best to move on ;-0 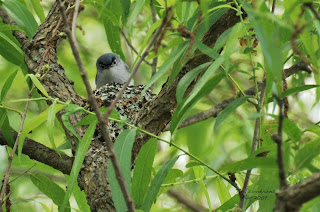 Some times it just fun to watch an animal or a bird deal with the little problems of the day.. this poor Gray Catbird couldn't decide which leaf to choose..he had several in his bill before he finally settled on this one..I did wonder what the criteria was.. 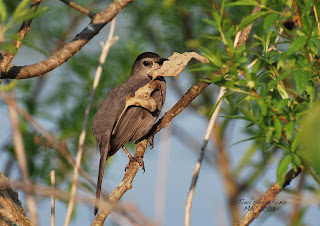 ...and this cute little Red Fox kit was just too tired to move, as I walked near by...that good ole log and that sun just felt too good to give up! He kept me in his sights but by the time I left he had a good case of the yawns...hmmm, I wonder where Mom was? 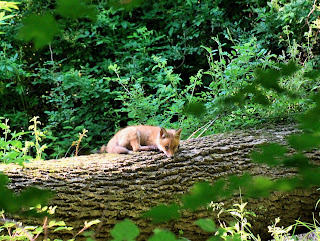