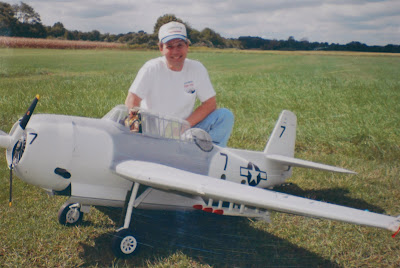 Some of you have asked if I have been taking a blogging vacation ( I have not been posting as much as I used to) which was very nice that you inquired. I really do appreciate your concern..and all is fine...Really! During the summer I get very busy with another type of bird .. so I decided to share some photos of the OTHER birds who I take photos of, help organize, pack and ship kits, carry, etc.. ..the ones that live in my basement and in my dining room and come out to play on calm, sunny days and definitely on all summer and early fall weekends. My husband builds, from scratch, remote control WWII model airplanes...also known as Warbirds. He does demo flights prior to full-scale (real) airshows and we also attend remote-control airshows up and down the East coast most of the summer. His planes have taken Best of Show many times and the 2007 and 09 WRAM NY Designer Award. They are built to scale (1/6 scale) all balsa wood with wing spans that range from 101 inches to 114 inches. They all fly, have retractable landing gears and are gasoline powered.

This is a bomber called an Avenger/ TBM 3E used mainly in the south pacific during the war.
Looks real doesn't it..we take them to an old navy base to take their pre-maiden flight photos.
Placing them on the old runway helps to give them a realistic look. 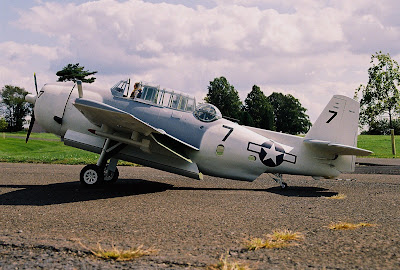 This is another Avenger TBM 3E bomber (different paint scheme and different markings) ...releasing its torpedo during a demo flight for a show we attended last year. The plane is flown and operated completely by radio. Timing is essential when releasing any bombs or torpedoes. The average weight of his planes runs about 36-38 pounds. 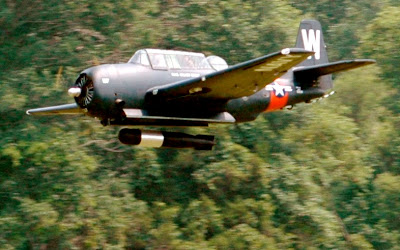 This is a P-38 Lightning, a fighter, used all over the world during WWII, but most likely remembered as being more successful in the Pacific. This model has twin engines and is the largest wing span of his planes..114 inches. The engines for the P-38, for those who want to know, are 50cc/ quite powerful. Speeds reach 60 - 80 mpr. for most of these planes. 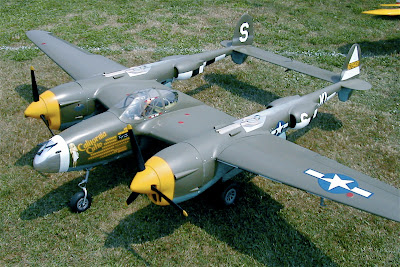 This is a BeechCraft D-18/C-45 transport, used to transport VIPs during the war. Also a twin engine. All landing gears on his planes retract and fold up into the belly of each plane. The "W" insignia (seen of the tail) represents Willow Grove Naval Airbase.. where his father was in the Navy. The real (blue) Avenger and Beech Craft actually flew out of Willowgrove in the 1940/50s. 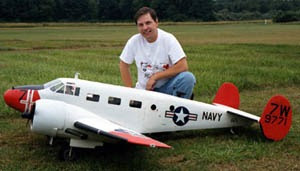 This is an SNJ or an AT-6. It was used by the military, as an advanced flight trainer.
I am his partner in crime, so to speak. We have been doing models for over 30 years. He has recently started selling his own designs for these airplanes. The Avenger and the Skyraider shown below are his own plans and he sells the kits, plans and other parts to build. About 1200-1600 man hours go into building one of these. As all pilots know, what goes up must come down..and we have lost a few a long the way..but it is his hobby and now his mini-business. It does, however, keep us busy during the summer months as we travel quite a bit...but all in fun! 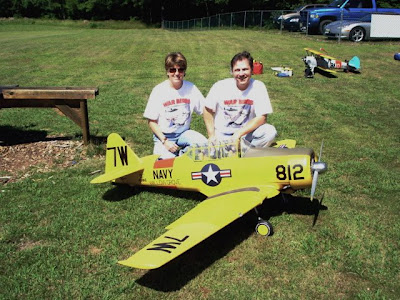 His latest design and build is the AD-5 Skyraider (pictured below) which just flew her maiden flight this past Spring. Well, now you know about the other birds in Tina's life...the giant-scale birds.
We are off for a long weekend and show being held in Newark, Delaware...so I will be catching up with everyone early next week. If you really want more info on his craft...feel free to visit us at www.Kelloggplans.com ... if not that's fine and dandy ;-) Do hope you all have a great weekend! 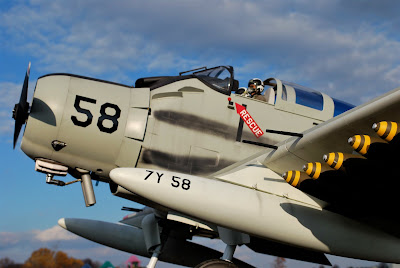 Dancing for your dinner! 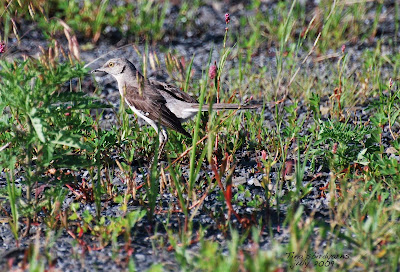 I caught this little Northern Mockingbird foraging among the grasses and small plants while we were at a nearby field. He put on quite a show of flapping his wings and jumping up and down creating movement to make all those yummy insects run or fly. He was quite the aggressive feeder. 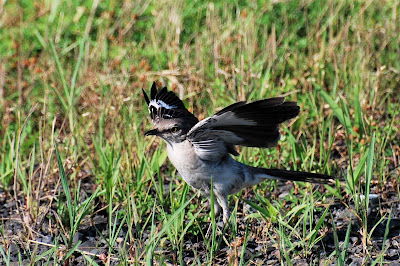 Look at that face! He is doing some serious dancing here. He is also doing some serious pest control as he will consume large quantities of beetles, ants, wasps and grasshoppers. He does vary his diet with a variety of berries and other fruit..but if you get a chance to watch him dance for his dinner..it is quite entertaining! 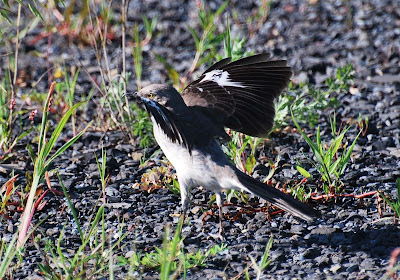 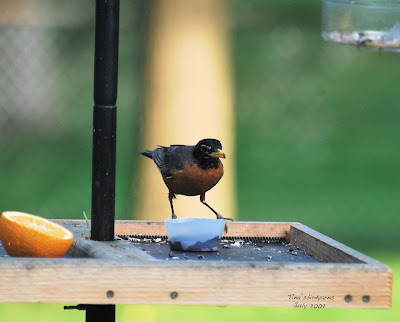 I think I did a double take when I saw a robin sitting on my platform feeder..I remember thinking, what do you suppose this bird is eyeing from that bird seed mixture? 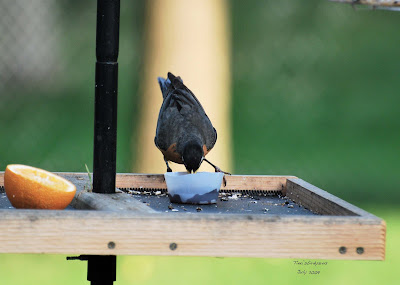 Oh my goodness, it is eating the grape jelly!! lol! A surprise to me!!
I see him every day getting his jelly fix! Morning, noon and late day.. I love it!!
(click to see that big blob of jelly he is holding in his bill) 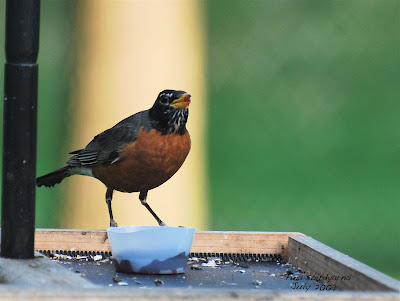